Sagicor South East FC are the champions of the DFA Premier League. They defeated the defending champions CCCU Dublanc FC 2-0 at the Windsor Park Stadium. After a goalless first half, Sydney Lockhart opened the scoring for South East, with Josely Prince putting the icing on the cake.

At a short presentation after match President Glen Etienne presented a cheque of $15000.00 to the winning captain of South East, while Sydney Lockhart received $500.00 for the man of the match.

MiddleHam will now wait to play the runners up of the Division One league play offs to determine their status at the Premier league. 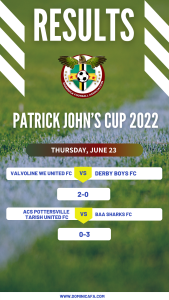